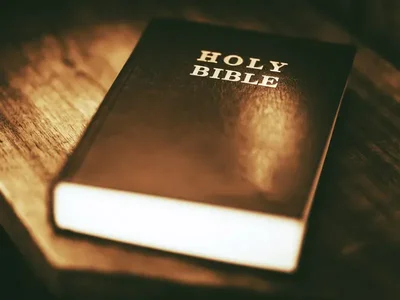 Isn't the Bible just any other book? Wasn't it written by everyday men thousands of years ago and not really apply to today? What is so different about the Bible compared to other old writings? These are pretty common questions to the typical reader of scripture that has not studied biblical history. And they are very good questions actually, questions that should be answered for everyone. So, what does make this book so special? Well, let's go over some facts that you may not have known.

The Bible is actually not just one single book. It's actually comprised of 66 books combined into one. Thirty nine books make up the Old Testament, and twenty seven make up the New Testament. The word Bible itself comes from the Latin word "biblia", which actually means "books". These books were authored by approximately 40 very different writers, in a span of history over 1500 years, on 3 different continents, and written in 3 different languages.

The vast diversity of the authors included kings, priests, a physician, a lawyer, prophets, legislators, courtiers, a tent maker, fishermen, shepherds, a former Pharisee, statesmen, a hated tax collector, a military general, a scribe, a cup bearer, a goat herder, and even a gentile (non-Jew). These writings were written in the languages of Aramaic, Hebrew, and Greek.

The books of the Bible were penned across dispersed lands such as Rome, Mesopotamia, Persia, Egypt, the palace of Jerusalem, the Sinai desert, a cave in Judea, the palace of Shushan, beside the river of Babylon, Macedonia, areas in Greece, and even the desolate island of Patmos. Not only were the authors separated by vast distances, but they were also separated by hundreds, some more than a thousand, years. Neither were they all of the same families or bloodlines.

It's also good to note that at the time the Bible was written, about 27% of it was prophetic. There are approximately 1,817 prophecies, of some nature, originating at the time the authors wrote the scriptures (a prophecy is "pre-written" history). Many of the prophecies written have already happened, and many are still coming to pass even today.

The many diverse books of the Bible have almost 3000 cast members in the story line, spanning over 1189 chapters, comprised of some 31,000 verses, requiring 700,000 words, and containing 3.5 million letters!

Yet with all this diversity of the authors, languages, time spans, and vast distances, all the books of the Bible speak of ONE story of human history, ONE people of God, ONE problem of mankind, ONE solution to the problem, ONE plan of salvation, ONE standard of morality, ONE narrative describing earth's final days, and speaks with ONE voice that never contradicts itself!

"...all the books of the Bible speak of ONE story of human history, ONE people of God, ONE problem of mankind, ONE solution to the problem, ONE plan of salvation, ONE standard of morality, ONE narrative describing earth's final days, and speaks with ONE voice that never contradicts itself!"

Concerning contradictions, if you are actively seeking for a problem in scripture, you will always find it. Why? When the Bible is read with a heart that is not actually seeking truth, but instead looking for ways to disregard it's message or not give scripture its due process, it's very easy to interpret the Bible's writings as you see fit (many cults are formed this way). Countless situations in life can appear one way on the surface, but end up very contrary after someone digs underneath the surface.

It's easy to forget there are many differences in the cultures which these books were written compared to today. If you find what you think to be a contradiction you should take the time to research when the book was written, who wrote it, to whom it was written, what is the topic being discussed by the author, and what culture and time period it was written in. Every time you do this, you will find that there really is no contradiction at all.

So again, what makes the Bible so special? Aside from the scripture's origins, the real thing that sets the Bible apart is its ability to predict the future with prophecies. This ability proves that the Bible had to have an author with foreknowledge hundreds or thousands of years into the future. No human can do that, but someone outside of time could. Scripture says many times that the words of the Bible are not just words of men, but they were instead inspired by God. Meaning, the authors only "penned" the words, but God Himself gave the authors the dialogue in which to write.

All scripture is given by inspiration of God, and is profitable for doctrine, for reproof, for correction, for instruction in righteousness:

Knowing this first, that no prophecy of the scripture is of any private interpretation. For the prophecy came not in old time by the will of man: but holy men of God spake as they were moved by the Holy Ghost.

bible scripture history facts
Repentance Is Not Perfection
Of Men And Dinosaurs
"Ahhhhh... No Thank You!"