What Is Hell and Why Do People Go There? 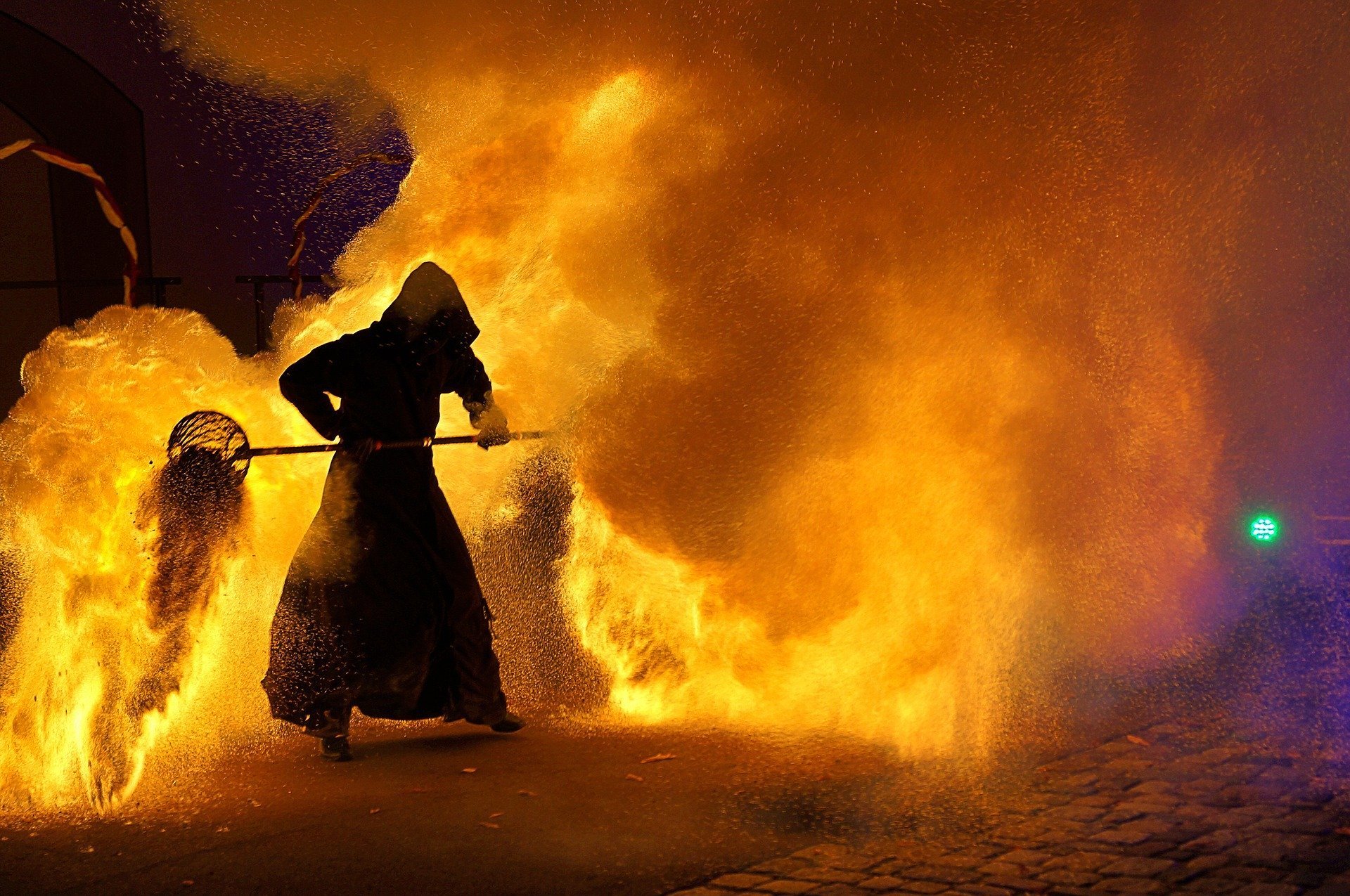 People have a view of God being very angry, cruel, and unfair; pointing His finger in disgust at all of us. Especially from explanations of the stories in the Old Testament that the world typically gives. And unfortunately, people rarely seek out to check the validity of mainstream teachings for themselves; I suppose they lack the interest or determination. How many people have bibles in their homes that simply collect dust? I have found that even when I go to church I rarely see anyone with their bible anymore. Sometimes even the pastor teaches without his bible. How can you learn from a book you never open? How do we know everything we are being taught is correct if we don’t double check it in scripture for ourselves? Even Paul in Acts 17:11 had listeners double checking his teachings in the scriptures for themselves, and Paul is the man that wrote 13 books of our New Testament.

What’s even more amazing is the fact that people tend to completely ignore the blatant acts recorded in scripture that prove the OVERWHELMING RIDICULOUS abundance of God’s love for us. God IS love!

"And we have known and believed the love that God hath to us. God is love; and he that dwelleth in love dwelleth in God, and God in him." - 1 John 4:16 KJV

People seem to be more attracted to "doom and gloom" by nature, making mainstream TV programs and opinionated books, claiming to "decode" God and scripture, feel more comfortable for that person to accept. It’s honestly a horrible crutch to have. It's hard to say out loud, but I believe it really leads to a high degree of ignorance of God’s word. This is then replaced with the acceptance of selective secular explanations that cause people to go no further because they are either stunted into complacency, or left in discontentment.

So, "Why would God send people to a Hell, where they will be tortured forever?" That is the million dollar question that many who do not regularly study scripture in depth have a hard time reconciling with the idea of a "loving" God. It's the very reason the cult Jehovah's Witnesses came to be. JW's founder, Charles Taze Russell, was unable to accept the truth of an eternal Hell, so he created a religion of his own. It’s really too bad that he didn’t instead look at the finer details that make up the bigger picture. Unfortunately he didn't, and now there are over 8 million members of the JWs worldwide today.

I'm going to attempt to give you a brand new way of looking at what Hell is and why people end up there. You may feel free to disagree with me if you like, it's ok. I encourage you to always double check my doctrine and email me your feedback if you feel I'm missing something or just plain incorrect. I am only sharing this as what I have learned from my 8 years of in depth scripture studies.

We all have to understand that we are eternal beings. Because we are made in the image of God, we will never cease to exist. When you read about eternal “life” or eternal “death” (or even just "life" or "death" in general in certain verses), you have to change your thinking on this a bit. The “eternal” part is static, meaning it doesn't change. The fall of man was actually the death of “the spirit”. But we can bring our spirit back to "life" when accepting Christ.

A good example could be this… Think of your existence as being represented by an indestructible cup. When we were initially created in the Garden of Eden, our cup was full of wonderful sweet wine (the wine representing our spirit). Our cup was full and spotless. Yet the event in the garden turned the sweet wine in everyone’s cup into a bitter disgusting sludge, tarnishing the cup along with it (our dead spirit now cursed by sin). Notice how in this example the cup is only tarnished by it's polluted contents, but does not cease to be a cup, or get thrown out? The very same principle applies to our existence, we never truly cease to exist. We are made eternal in the image of our eternal Creator; it’s just the nature of our existence. There is no changing it.

Moving forward, it does help to know where scripture says Hell is. Generally, we think "down" when we think of Hell. But I suspect that most of us think of Hell as being in some other dimension and THEN down. This is actually not the case. When Jesus Christ died on the cross, scripture does, in fact say, that He descended into Hell. But instead that Jesus Christ descended into the "heart (or lower parts) of the earth", putting Hell's location physically below everyone's feet.

"He seeing this before spake of the resurrection of Christ, that his soul was not left in hell, neither his flesh did see corruption." - Acts 2:31 KJV

"(Now that he ascended, what is it but that he also descended first into the lower parts of the earth?" - Ephesians 4:9 KJV

Now one HUGE POINT that people seem to misunderstand is that God DID NOT create Hell for us. God created Hell for the “devil and his angels”.

"… into everlasting fire, prepared for the devil and his angels:" - Matthew 25:41 KJV

God does NOT want ANY of us to go there! It’s the whole reason Jesus hasn’t returned for His people yet. He is LONGSUFFERING and waits for people like you!

"… but is longsuffering to us-ward, not willing that any should perish, but that all should come to repentance." - 2 Peter 3:9 KJV

In fact, God has prepared a much different place for us!

God does NOT take any pleasure that anyone ends up in Hell.

“Why is Hell so horrible?” Here is the next question we need to ask. The short answer I would like to present to you... because it’s a place that God has removed His attributes. Bare with me on this. Scripture says God is light; so it’s dark in Hell. Scripture says water is from Heaven; so there is no water in Hell. I rummaged through scripture and compiled many of these types of attributes that I would like to share. Here is a list of verses explaining attributes of Hell, or just apart from God, and then the verse attributing it to God.

There is no water in the pit/Hell.

Water is from Heaven.

Scripture also speaks of a “blackness of darkness forever”, which to me speaks of a darkness that is eternal.

"Raging waves of the sea, foaming out their own shame; wandering stars, to whom is reserved the blackness of darkness for ever." - Jude 1:13 KJV

In contrast, we know that God is light.

"This then is the message which we have heard of him, and declare unto you, that God is light, and in him is no darkness at all." - 1 John 1:5 KJV

People have no rest or sleep in Hell.

"But the wicked are like the troubled sea, when it cannot rest, whose waters cast up mire and dirt." - Isaiah 57:20 KJV

"And the smoke of their torment ascendeth up for ever and ever: and they have no rest day nor night, who worship the beast and his image, and whosoever receiveth the mark of his name." - Revelation 14:11 KJV

But again, we see that God gives us rest and sleep.

There is no peace in Hell.

God is called the Prince of Peace.

"… and his name shall be called Wonderful, Counsellor, The mighty God, The everlasting Father, The Prince of Peace." - Isaiah 9:6 KJV

I could just summarize it all with these verses.

"Every good gift and every perfect gift is from above, and cometh down from the Father of lights, … " - James 1:17 KJV

At this point we know that God did NOT create Hell for us, but instead for Satan and his agents. We know that God does NOT want us to go there, and rather is “longsuffering” (having or showing patience in spite of troubles) in His wait that we ALL come to Christ. Lastly, we know that everything, and I do mean EVERYTHING, good comes from God; our rest, peace, strength, air, sunshine, water, food, our being, etc. This is why God is called The Great “I AM”.  I AM rest… I AM peace… I AM light… I AM truth… I AM life… I AM breath… I AM love… Literally, just fill in the blank. God is ALL good things.

"And God said unto Moses, I AM THAT I AM: and he said, Thus shalt thou say unto the children of Israel, I AM hath sent me unto you." - Exodus 3:14 KJV

And now we come to the big question, “Why does God send people there?” My final short answer... God does NOT send people to Hell. People, like Satan and his demons, who want nothing to do with Jesus Christ CHOOSE to end up in this place, void of God's presence and attributes. God isn’t going to force you to go to Heaven with Him, He respects your free will. And since all good things come from God, when you reject Him, what other alternative is there? Might want to give that some thought.

Additionally, God isn’t going to simply destroy you either. Have you ever wondered why Satan has not been, or will be, destroyed? Or why an eternal Hell was created to keep Satan in? Satan is eternal also, like us. My guess is if God was going to start destroying eternal creatures that rejected Him, don’t you think He would have started with Satan and his followers? Why keep them in a Hell?

I trust there is a very good reason why God is not going around destroying the immortal aspect of His created beings, including us. And I can't bring myself to believe it is for an unfair or cruel reason. God’s ways are higher than my ways, and His thoughts are higher than my thoughts.

"For as the heavens are higher than the earth, so are my ways higher than your ways, and my thoughts than your thoughts." - Isaiah 55:9 KJV

After reading and studying many of the ways that God has expressed His love for us, and is reaching out to us, it’s bewildering to me how anyone on this earth can reject that. Like a child rejecting his loving parents. If a child rejects their family, they would simply be cut off from that family’s resources. The father is not going to seek out and DESTROY his child; that's absurd. Fathers always love their children, rejected or not. I’m sure God has a broken heart that can’t even be described with words for those who chose to reject Him. A broken heart that is far beyond our own understanding. How GREAT is God’s love for us! He is ALL that is good; that is not just a cliché… IT’S FACT!